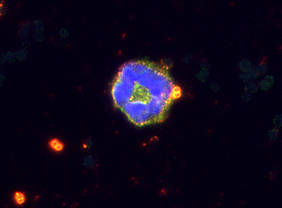 The complement system is crucial in the defence against invasive meningogoccal diseases (meningitis, septicaemia) and can kill these Gram-negative bacteria in presence of bactericidal antibodies. Yet, the contribution of cellular effectors to the disease outcome is not well understood: Phagocytes might aid in pathogen removal, but they could also be inadequately activated by the high levels of endotoxin released by N. meningitidis and fuel disease pathology. Neutrophils are recruited in large numbers to the meninges during meningococcal meningitis, but their functional impact in this setting is not clear.

In this study, we wanted to analyze whether the capacity of human primary neutrophils to eliminate N. meningitidis is strain-dependent. To our surprise, we found that neutrophils were rather inefficient in taking up meningococci and this non-opsonic uptake depended on Opa expression by the bacteria. Even in presence of normal human serum, there was very little neutrophil uptake of N. meningitidis. In immune sera, however, meningococci were efficiently associated with neutrophils. This effect was reversed when the sera was heat-inactivated or when using a C3-inhibitor (compstatin Cp20). Hence, meningococcal uptake did not depend on antibodies, but on activated complement on the bacterial surface.

We assessed several parameters of neutrophil activation and found that the oxidative burst response critically depended on complement, whereas there was little influence of the presence of complement on the degranulation response or on liberation of IL-8.

Together, the data show that full activation of neutrophil responses to meningococci require complement activation.