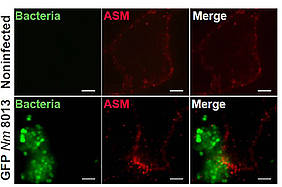 Acid sphingomyelinase (ASM) is a lipid hydrolase that converts sphingomyelin to ceramide and that can be activated by various cellular stress mechanisms, including bacterial pathogens. Vesicle transportation or trafficking of ASM from the lysosomal compartment to the cell membrane is a prerequisite for its activation in response to bacterial infections; however, the effectors and mechanisms of ASM translocation and activation are poorly defined. Our recent work documented the key importance of ASM for Neisseria meningitidis uptake into human brain microvascular endothelial cells (HBMEC). We clearly identified OpcA to be one bacterial effector promoting ASM translocation and activity, though it became clear that additional bacterial components were involved, as up to 80% of ASM activity and ceramide generation was retained in cells infected with an opcA-deficient mutant. We hypothesized that N. meningitidis might use pilus components to promote the translocation of ASM into HBMEC. Indeed, we found that both live, piliated N. meningitidis and pilus-enriched fractions trigger transient ASM surface display, followed by the formation of ceramide-rich platforms (CRPs). By using indirect immunocytochemistry and direct stochastic optical reconstruction microscopy, we show that the overall number of CRPs with a size of 80 nm in the plasma membrane is significantly increased after exposure to pilus-enriched fractions. Infection with live bacteria as well as exposure to pilus-enriched fractions transiently increased cytosolic Ca2+ levels in HBMEC, and this was found to be important for ASM surface display mediated by lysosomal exocytosis, as depletion of cytosolic Ca2+ resulted in a significant decrease in ASM surface levels, ASM activity, and CRP formation.